Psycholinguistic Aspects of Focalization in a Paradigm of Narrative Discours

The author of this article emphasizes that  study of the narrative discourse on the example of English literature, the definition of psycholinguistic aspects of such a discourse is a very actual problem of the present, since this kind of discourse plays an important role in all genres of fiction. In this article, the narrative discourse will be analyzed on the example of graphic novels, and based on the analysis will be determined the psycholinguistic features of the narrative discourse. In the article it was emphasized that the analysis of the materials presented in the form of comics is important for defining the features of the narrative discourse, because the person who is observing is only the object of visualization, and not its subject. In the case of the character watches for something, the reader will be positioned exactly like this character.Herewith, a certain type of positioning is important for the narration of text material presented in the form of comics, because it is this type of positioning greatly affects the values created by the reader’s work.

It was emphasized that the psycholinguistic narrative paradigm in the form of comics should be considered in the context in which comics are the assembly of both words and images, and thus the reader should carry out both visual and linguistic interpretation of the content. The psycholinguistic paradigm of comics contributes to the fact that artistic schemes (for example, the point of view, symmetry, the contextualization by means of contextual details), and sections of linguistics (for example, grammar, literature, syntax) appear to overlap each other, create an integral frame, which strenghtens the reader’s understandinf of a certain work.

In this article the context of “focusing” from the point of psycholinguistic view was analyzed. The author of this article described his own version of comic comprehension processing, which is based on the knowledge of various narrative schemes, constantly changing the source data and obtaining the new information. Understanding in this case is represented as a series of transitions from the external to the internal focus. The latter often happens in a visual form, creating visual continuity through the processing of information from the bottom to top, while the change in the time and space of the plot occurs by text information processing from the top to bottom, combining previous knowledge of the characters and actions of the characters of the work into the new contextual scripts.

Analyzing the work “Night Guards” by Alan Moore and Dave Gibbons, the author of this article proposed the following psycholinguistic aspects of the narrative discourse, namely: visual accentuation, updating of information, meta-narrative  presentation of the text, contrasting visual word-combinations, actualization of the narrative potential. 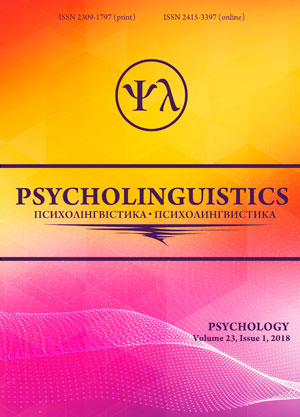